From flying hedgehogs to a loved-up poet – Ticino is the land of chestnuts. And the locals are simply crazy about them.

«How mighty they stand, how lush their blossom, how deep their rustle, how intense their shadows. In summer they swell voluptuously, in autumn they scatter a thick, soft blanket of golden-brown leaves!»

This is just one of Hermann Hesse’s love letters to chestnuts. And perhaps it also contains a trace of his love for Ticino, where the poet spent many years of his life. Ticino is the land of chestnuts. Walk the seemingly never-ending trails that wend through the region’s chestnut forests at the moment and you’ll hear the rustle of leaves and sometimes the soft, dull thud of a chestnut falling – the muffled sound of its echoless fall is gone in an instant.

It’s only then that you realise you’ve had a lucky escape not to be hit on the head by a tiny hedgehog. Ah, that prickly case with its round, shiny, red-brown chestnut! What a pleasure it is to see the nut, touch it, eat it! The sweet chestnut has been a staple in the remote valleys of Ticino for centuries. It has always been prized for its high amount of carbohydrate, served cooked or roasted. Chestnuts in milk was once supper for the people of Ticino. Chestnuts were a valuable source of food that saw them the winter over. One tree was enough for one person. And every tree was numbered, so whatever fell from it belonged to the owner. Not only the nut was seen as very valuable; dried leaves from the tree were also used as animal feed, trunks turned into furniture, branches burned for heating.

Once considered the bread of the poor, today the chestnut is celebrated for bringing a distinctive flavour of autumn to regional cuisine. Whether in a purée, risotto, pasta, liqueur, confiture, or roasted as a snack to munch on while strolling along Lago Maggiore, the Ticinese are once again crazy about chestnuts. The people living in the valleys still cling tightly to chestnut-related traditions, drying the nuts in a two-storey, stone-built smokehouse called a grà. Here the chestnuts are slowly dried for three weeks over a fire – a means of curing them. When white smoke rises from a grà during this time, it’s not because a pope has been elected but because a chestnut has been sacrificed.

Information about the chestnut:

CHESTNUT TRAIL
The Ticinese call it the «sentiero del castagno». It’s situated in the region of Malcantone, where poet Hermann Hesse once lived, and leads through huge chestnut woods and enchanting little villages. The starting point is Arosio, around a 30-minute drive from Hotel Giardino Lago. Best time of year: September to November; Distance: 14.8 kilometres; Elevation difference: 728 metres; Duration: 5 hours.

Chestnut soufflé
Dessert for 4 to 5 people

Mix the milk, flour and butter together into a roux. Blend the rest of the ingredients into the cooled mixture until smooth. Beat the egg white separately into fluffy peaks and carefully fold into the mixture, adding in the chestnut liqueur. Spoon the mixture into sugar-dusted, ovenproof tins and bake at around 190°C for approximately 25 minutes. Enjoy! 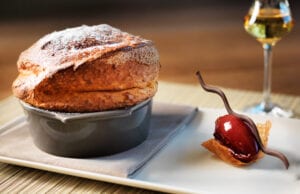 The hotel to the story:
Hotel Giardino Lago, Minusio

Our leitmotif is “un po dipiù”

Read
Ayurvedic tips for the woman after childbirth

Grapes, the Superfruit from Ayurveda

Hints for hot days and nights