Spring in Ticino is long and intense. And just as soon as it ends, it’s right around the corner once again. How lovely! One could be forgiven for calling the area “kitschy”, given its landscape dominated by the bright blue lake, white mountains and colourful flowers. A declaration of love by Elsemarie Maletzke.

Gardener and local councillor Fritz Zollinger did not wait long to find out what his town of Locarno planned to do with the landfill site at Lago Maggiore. He took a spade and started to plant camellias – simple varieties, red and white, along the road. Evergreen beauty where the rubble once was. The camellia is a prima donna among house and balcony plants – one that responds to any lapse in care by dropping its buds; but around Lago Maggiore, it seems relaxed and altogether affable. “The camellia is happy here,” says Verena Pedrotta, florist and daughter of the former gardener, as she takes me on a tour of the Camellia Park, which now covers an area of 10,000 square metres and is the pride of Locarno.

In 1990, when Locarno was nominated for the 2005 International Camellia Congress, things really got going, and another five hundred seedlings were planted – striped, spotted, filled and unfilled, anemone- and peony-like varieties with blossoms that resemble porcelain or waxy silk, and some so big you need both hands to cup them. Below the plane trees at the lake, Camellia japonica enjoys its very own microclimate: shade, frost protection, acidic soil and cool moisture. Some of the plainer blossoms are even fragrant. The big, showy ones have no need of fragrance to impress, however fine.

“Too picturesque to be true”
The happy Camellia japonica fits in well in this smiling swathe of Swiss landscape around the northern tip of Lago Maggiore: Locarno and Ascona on the one side, Gambarogno on the other. In spring, the region is almost too picturesque to be true. The view from the Botanical Garden in Vairano stretches beyond the brightly coloured blossom framed by Italian cypresses to the sparkling lake, the green Maggia delta and the snow-covered Alpine peaks. Nature and the gardener Otto Eisenhut have worked together to create a colour explosion on these steep slopes – flaming azaleas, lilac wisteria, pink camellias and 450 magnolia trees, including a rare yellow variety. Everything has grown together to form a pseudojungle that can be descended on barkcovered paths.

The towns on the other side of the lake have also grown, and took on their own unique shape as they did so. Locarno basks in the glory of legendary past lives and the somewhat more garish glow of new prosperity. The Piazza Grande, the location of the International Film Festival, is home to camellia trees 160 years old, which drop their white and red petals on the cobbles, unswervingly elegant and lavish even as they do so.

The Brissago Islands
The camellias call to mind Baroness Antoinetta Saint-Léger, a lady from St. Petersburg, contemporary of the brightly coloured trees on the Piazza Grande and possibly similar in nature. In 1885, she purchased both of the Brissago Islands, situated a few kilometres to the south-east on Lago Maggiore, near Porto Ronco. Madame Saint-Léger was renowned for her grand gestures – not only did she pour money down the drain having unimaginable quantities of soil transported over to the mounds of rock and planting cypresses, palm trees, tree ferns, rhododendrons, eucalyptus trees, magnolias, mimosas, bamboos and citrus fruits. She also financed insane undertakings, such as the extraction of oil from grasshoppers and alcohol from peat – right up to the bitter end. When, in 1927, she had nothing left to spend and was forced to sell Brissago, the new owner, the Hamburg department store tycoon Max Emden, renovated a mill for her on the lake shore in Ronco as a place for her to live out her days, gazing over at her beloved islands.

What Madame saw was the construction of a classicist villa, with arcades and balustrades and a series of statues on the roof. What she did not see, but soon everyone was talking about, were the goings-on behind the mimosa hedges. Emden invited large numbers of young women to his island, who pranced through the flora clad only in their birthday suits. The Baroness’s former vegetable garden on a terrace above the lake was transformed into a walled “Roman baths”, and a lasting image of Brissago that has been passed on is a picture of three well-tanned girls, two of whom are stark naked and bending over the railing in an opening in the wall, their knees coquettishly pressed together and their backs at a slant, looking across the lake towards Ascona. West German Chancellor Konrad Adenauer, who holidayed on nearby Monte Verità 25 years later, posed with his hat, walking stick and overcoat in front of the same railing, and referred to the sight through the opening in the wall as “one of the most spectacular views in Europe”. Today, Brissago is the botanical garden of the canton of Ticino. Some 1,600 plants from five continents thrive between the Baroness’s majestic heirlooms, from the magnificent Magnolia grandiflora to the tiny blue flax in the grass.

Together with the German banker and art collector Eduard von der Heydt, Max Emden helped to popularise tourism in the fishing village of Ascona. The two created the golf course at the lake, and while Emden, who was known to take his “island girls” for a spin on the bonnet of his car, appealed to the more erotically inclined visitors, von der Heydt played host to the smart and the witty on Monte Verità above Ascona. Twenty years previously, the hill had attracted anarchists, utopians, sexual Bolsheviks and raw-food eaters. The artists tended to settle in Locarno, while the Schwabing literary bohemians found themselves drawn to Ascona. In 1913, dancer Rudolf von Laban opened his summer school for expressionist dancers, subsequently giving rise to the German expressionist-dance movement. The local village residents joked about the Balabiòtt, the naked dancers who pranced around on the mountain. 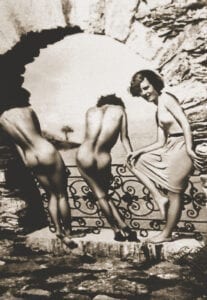 Brissago Islands: hedonism at the «Roman Bath» (circa 1930).

The text is abridged and was published in full in the Frankfurter Allgemeine Zeitung.

The hotel for the story:
Hotel Giardino Ascona, Ascona

I’ve always been fascinated by Switzerland

Our recipe of the month:
“Giardino Mountain Spritz”

Small but powerful! The significance of micronutrients for your health